Aadavallu Meeku Johaarlu Movie Review: Aadavallu Meeku Johaarlu’s star-studded ensemble and global theme have recently caught the attention of Telugu filmgoers. The lightheartedness of the trailer, which was released only five days ago, heightened the public’s interest even further. After repeated setbacks, the picture will finally hit theatres on March 4th, 2022, thanks to a final push from the studio. 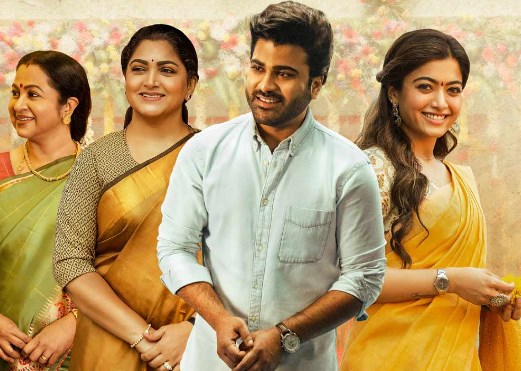 Looks like Sharwanand has finally found some success with his latest film, which earned a positive review from a morning show host, who stated that the film was a “laugh-riot” and that audience reaction in the theatre were “crazy.” The film’s all-female cast has attracted a wide audience and paid off for the producers and directors. We’ll have to wait and see if this film is worth seeing or not.

Chiru (Sharwanand) is a laid-back guy who lives in a house dominated by ladies. A ideal wife for Chiru looks to be a necessity, but the woman gang refuses to settle for anything less than perfection. Chiru discovered that his lady gangs never get any girls, so he wanted to find himself and in the process found Aadya (Rashmika) and fell in love. As a result of their engagement, he is now a father (Rashmika). Does Santhamma’s decision have any chance of being accepted by Chiru and his family? The rest of the plot revolves around Chiru’s reaction.

Kishore Tirumala’s film Aadavallu Meeku Johaaru never gets boring because the storey is simple, but he didn’t give the audience a chance to analyse the storey because he was dealing with comedy.

During the first 15 minutes of the film, Chiru (Sharwanad) is introduced and the film immediately transports you to his (Sharwanad’s) world.

In my opinion, this is the perfect film for Sahrwanad to show off his acting skills, which we are all well aware of. Sharwa has appeared in a lot of full-length comedies, but this one stands out.

Although Sujith Sarang’s visuals are adequate, DSP’s music fails to live up to expectations.
If you give it a chance with no expectations, you’ll fall in love with it.