Dhanush Telugu Dubbed Movies List: In India, everyone likes Dhanush Acting, Performance, and Script selection. He is one of the most popular and busiest actors in the country now. In recent times, Hollywood filmmakers have approached Dhanush to become a part of their movies, to use his acting talent and skills to showcase on the International canvas. 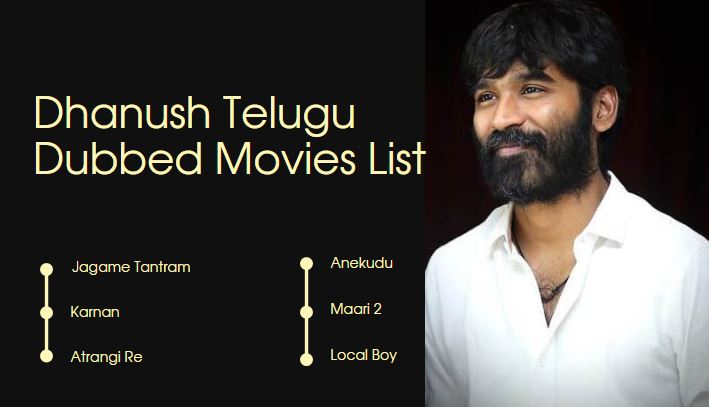 Dhanush is not only a commercial actor with huge stardom, he also does critically acclaimed roles. Films like Pudhupettai, Asuran, Vada Chennai, Aadukalam have immensely proved that he is one of the best actors in India. On this page, we are going to look at the Tamil actor Dhanush Telugu Dubbed Movies list to date.

Dhanush has starred in over 40 movies over the last 18 years. He was born to veteran Tamil film director and writer Kasthuri Raja. His brother Selvaraghavan is one of the well-known directors in India. Scroll down to check the Dhanush movies in Telugu.

Though the Indian film industry was separated by language, the crossover audience in India eagerly waits for the dubbed movies of their favorite stars in other regional films. South Indian Tamil film stars like Dhanush, Rajinikanth, Kamal Hassan, Vikram, Suriya, and others have a big fan following in North India. Fans eagerly wait for their Telugu dubbed movies. So, we have come up with a list of Dhanush Telugu dubbed movies in one place.

Here we compiled a fully updated Dhanush Telugu movies list till date. We will update the list as soon as his new movie released into Theaters. So, We hope this will entice you to watch some. Also, read Kollywood actors Telugu dubbed Tamil movies list.

Dhoolpet (a dubbed version of the Tamil movie Puthupetta) is about the life of a gangster. Yuvan Shankar Raja and Arvind Krishna (cameraman) are an asset to the director Selvaraghavan. Still, the movie is a classic in Tamil Cinema and is released every year in Tamil Nadu theaters on New Year Day.

Dhanush’s 2013 film ‘Maryan’ also released in Telugu with the title Mariyan. It is a survival film starring Dhanush and Parvathy in lead roles. AR Rahman music is the biggest asset for the film.

Three is a disaster when first it was released but it was packed very well and reported as one of the best films in Dhanush’s film career as an actor.

Mayakkam Enna’s Telugu dubbed version has been Mr. Karthik. The film is a romantic musical and it stars Mirchi girl Richa Gangopadhyay as the female lead. Dhanush’s brother and popular director Selvaraghavan is the film’s director.